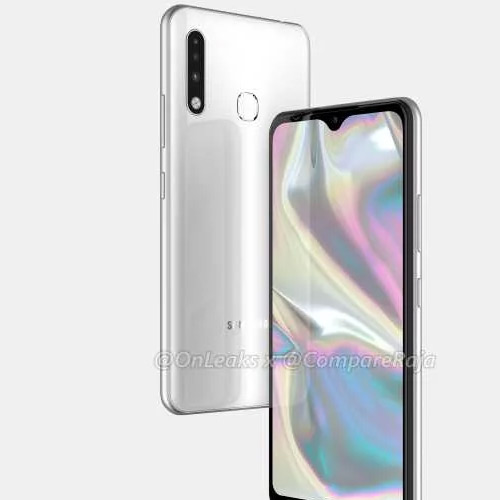 Last year Samsung announced the Galaxy A70, an upper mid-range smartphone with an Infinity-U display, triple rear cameras and a Snapdragon 675 processor. It followed it with the Galaxy A70s which kept most of the specs but swapped the 32MP camera of the first one for a 64MP sensor. Now renders of another model called the Galaxy A70e have leaked and it seems to be an affordable version of the Galaxy A70.

The source of the leak is OnLeaks and he has collaborated with Indian blog, CompareRaja.

The Galaxy A70e has an Infinity-U display like that of the Galaxy A70 and Galaxy A70s. However, the bezels around the display are thick. We are not sure if it is just the renders that are like this or if the final product will have bezels this thick. The screen size is put at 6.1-inches and it is flat at the edges.

The Galaxy A70e has an audio jack at the top while the bottom is home to the speaker grille, a MicroUSB port, and a microphone. The volume and power buttons are on the right while the SIM tray sits on the left. Video Player00:0000:21There is still a lot not known about the specs of the Galaxy A70e but it most likely will have a cheaper price tag than its siblings. The phone will be available in black and white color variants but there might be more when it eventually launches.